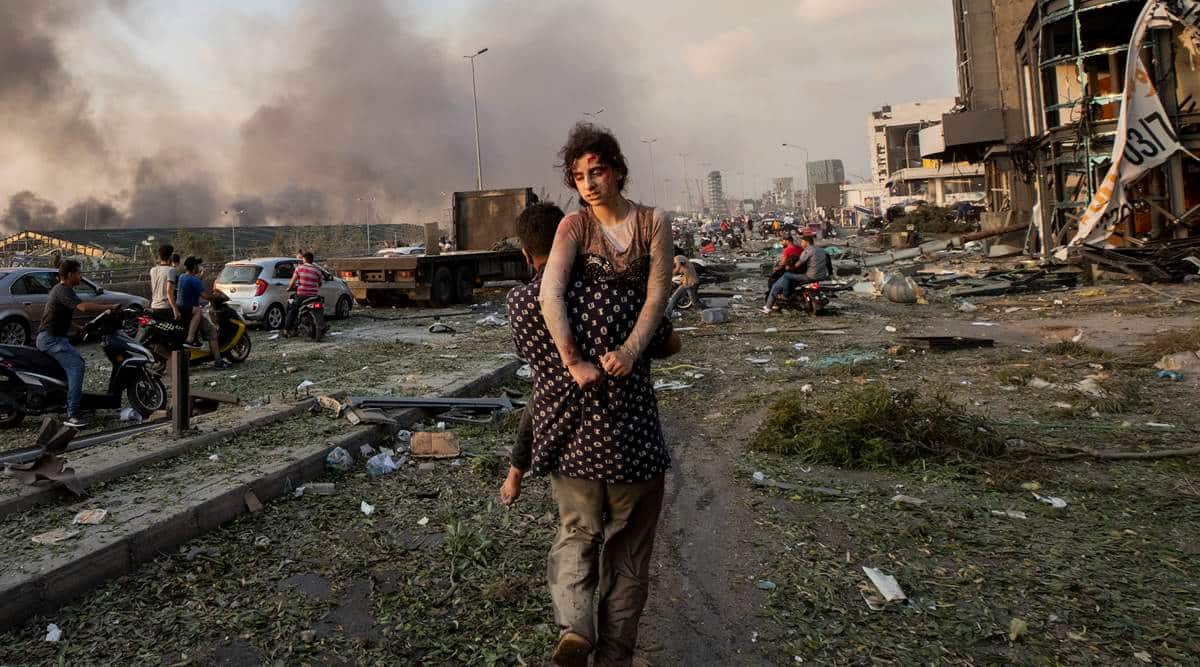 In this Aug. 4 file photo, Hoda Kinno, 11, is evacuated by her uncle Mustafa, in the aftermath of a massive explosion at the port in Beirut, Lebanon. (AP Photo/Hassan Ammar, File)

When Mustafa Kinno felt the ground shake and heard the deafening blast toward the port, he frantically called his brother living nearby. No reply. He tried a neighbor, who said the family was sitting outside their apartment across from the port when it exploded. Terrified, Mustafa ran more than two miles (four kilometers) to his brother, glass crunching under his feet.

When he arrived, first he spotted his niece Sedra’s head poking out of the rubble. He collapsed and crawled toward her but couldn’t move her. Then he found his younger niece, Hoda, slung her over his shoulder and started walking.
An image of the two, captured by Associated Press photographer Hassan Ammar, has come to symbolize the devastation of the Aug. 4 blast at the Beirut port, which took 193 lives and wounded 6,500. In the photo, a dust-covered Hoda, 11, holds her body stiffly against her uncle’s shoulder, a gash bleeding from her forehead, eyes half-closed and face set in a grimace.

At least 43 Syrians like Hoda’s family were among those who died in the explosion, plunging a war-weary community into further misery. Lebanon now hosts nearly one million Syrian refugees– about one in five people. “It was always bad even before the explosion, but we were getting by,“ says the sisters’ elder brother, Mahmoud. “Now life is unbearable.”

Ali Kinno, 45, moved from the Aleppo region of Syria to Lebanon in 2008 to find work, determined to provide a better life for his family. He got a job as concierge for the residential tower facing the port. In 2011, Syria’s civil war erupted. After northern Aleppo became a frontline a year later, Ali asked his family to join him in Beirut.

But the family never quite settled there. There was the harassment and discrimination against Syrian refugees, and it only increased as the country’s economic crisis set in.

Ali was so protective and scared for his children, especially the two girls, that he didn’t let them go to school, despite Sedra’s pleas. Because their mom suffered back pain and asthma, they took care of the apartment, especially Sedra.
“She cooked, made tea, she looked after her younger brother Ahmad, gave him his bath. She was everything,” said Ali’s wife, Fatima, choking on the last sentence. 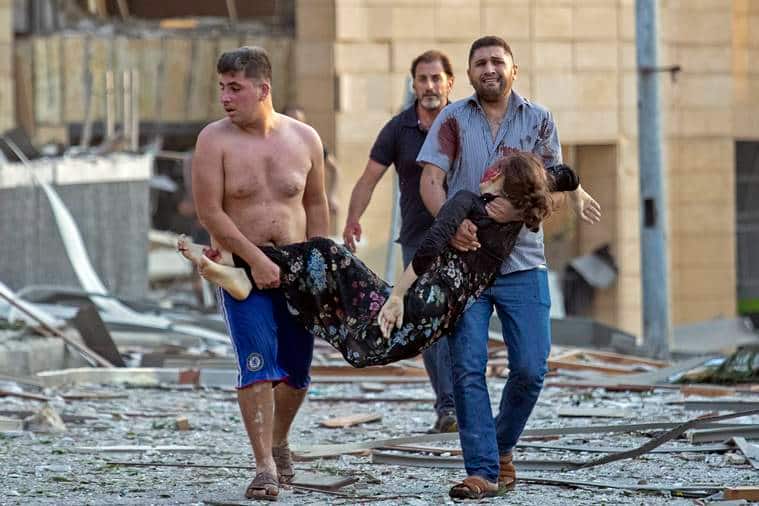 Sedra Kinno, is carried by her brother Qoteiba, left, and her brother in law Fawaz in the aftermath of the massive explosion at the port in Beirut, Lebanon. Sedra, 15, died in the explosion, while her sister Hoda, 11, survived with a broken neck and other injuries. (AP Photo/Hassan Ammar, File)

It was just after 6 p.m. on Aug. 4 when Ali asked his 15-year-old Sedra to prepare the tea. It was that time at the end of the day when the sun begins to soften, and Ali and his family sit outside the 20-floor residential building, drinking tea and watching the highway that runs parallel to the port. Only this time, smoke was pouring out of the facility.
Sedra brought the tea and put it on a small table but didn’t pour it – the family was animatedly discussing the pink-tinged smoke. The flames grew bigger, and the fire began making popping sounds.

Alarmed, Ali’s wife called for them to go inside the apartment. That’s when they heard the first explosion. But it was the second blast seconds later that seemed to lift the earth under the port and throw it in their direction. “It was as if the port came to us,” says Ali.

In a flash, the middle-class neighborhood turned to a hell on earth, tossing everyone and everything in the air and showering them with debris.

“Tiles, stones, aluminium, glass. Everything fell on us,” said Ali, who suffered brain hemorrhage, several broken ribs, loss of vision in his left eye and damaged hearing in his right ear that day.

Sedra died instantly, pinned by tile cladding that rained down from the building. Hoda suffered a neck fracture and other injuries. Fatima fractured her spine, shattered a leg and could not move.

That was the scene Mustafa saw when he arrived from across town and carried Hoda away. Hoda’s uncle put her in an army vehicle that was ferrying the injured to the hospital.

Another of Ammar’s photos captured Sedra’s dead body, in a long flowery dress, carried by her older brother Qoteiba and brother-in-law Fawaz.

Mahmoud, Ali and Fatima’s eldest son, had been at his job as a foreman in Kfour, 40 kilometers (25 miles) north of Beirut. Unable to reach any of his family in the wake of the explosion, he sat in a taxi for 45 minutes to Beirut. When the traffic got blocked, he ran the remaining few miles home.

“I saw people dead in their cars along the way… The more I saw the more I imagined something horrible has happened to the family,” he said.  That’s when Fawaz called him and broke the news that Sedra had died. The family of Ali Kinno pose for a photograph from left to right, Fatmeh Kinno, 45, Mahmoud, 25, Hoda 11, Qoteiba 17, Mustafa, 28, Ali, 45, Ahmad, 6 at a temporary apartment in the coastal town of Jiyeh, south of Beirut (AP Photo/Hassan Ammar)

A month after the explosion, the family has been reunited in temporary shelter in an apartment south of Beirut. They are devastated, still getting treated for injuries as the medical bills pile up.

Hoda, wearing a neck brace, barely speaks. She says she doesn’t remember the explosion and its aftermath. Fatima, her mother, says Hoda is obsessed with watching video clips of the blast on social media. She wakes up several times at night, sometimes crying. Fatima is dealing with her own demons.

“Everything scares me now, I see a door and imagine it will collapse on me,” she says, seated on a sofa with a bandaged leg and a back brace.

Mahmoud, the 25-year-old eldest brother, is saddled with responsibilities, now that his father has lost his job. With his own 4-year-old son to worry about, he says he is willing to risk his life to smuggle himself out of Lebanon to reach Europe.

“I don’t want to stay here another day,” he says. Ali keeps going back in his mind to that moment when he lost control over his family’s life, feeling utterly helpless. Ten days after the explosion, he went to the building, stood in front of it and cried for his daughter.

“She was always in the kitchen. She loved to cook,“ he said. “I imagined her there.”