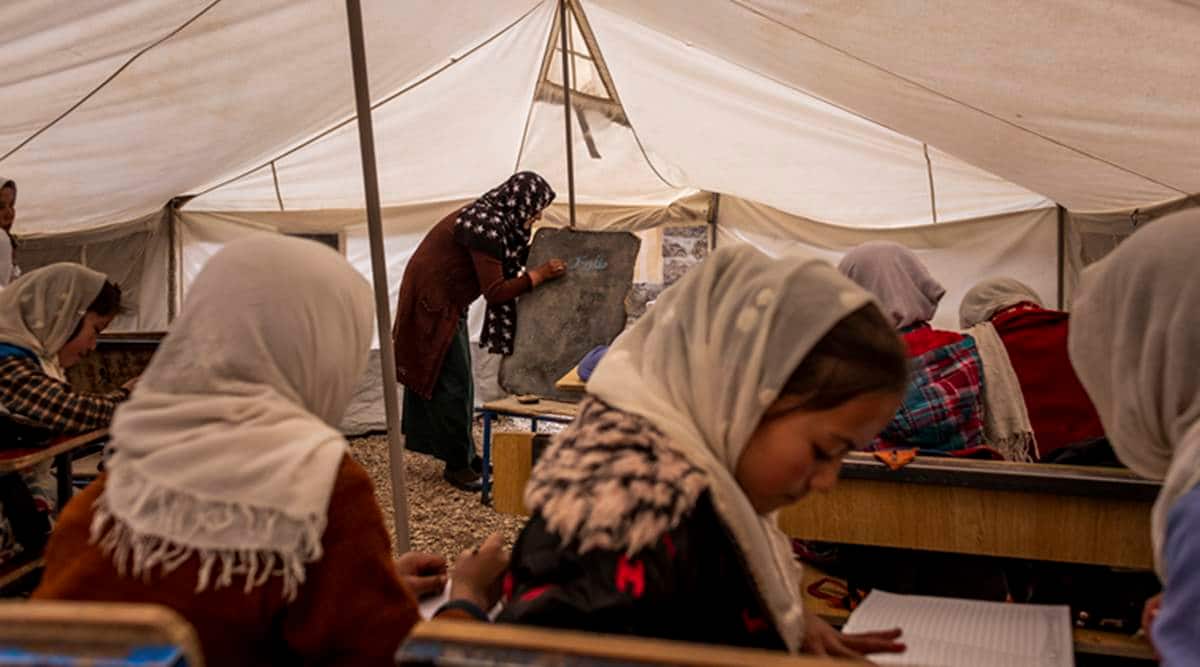 FILE — Girls at a school in Yakawlang, Afghanistan, May 19, 2019. An expected agreement between the U.S. and the Taliban to smooth future negotiations raises concerns that women may lose some freedoms. (Jim Huylebroek/The New York Times)

The US Embassy in Afghanistan is warning that extremists groups are planning attacks against a “variety of targets” but are taking particular aim at women.

The warning issued late Thursday doesn’t specify the organisations plotting the attacks, but it comes as the Taliban and government-appointed negotiators are sitting together for the first time to try to find a peaceful end to decades of relentless war.

The “Taliban don’t have any plans to carry out any such attacks,” spokesman Zabihullah Mujahed told The Associated Press on Friday.

Peace negotiations underway in Qatar, where the Taliban maintain a political office, are in the initial stages with participants still hammering out what items on the agenda will be negotiated and when.

Washington’s peace envoy Zalmay Khalilzad said at the start of negotiations last weekend that spoilers existed on both sides.

He said that some among Afghanistan’s many leaders would be content to continue with the status quo rather than find a peaceful end to the war that might involve power sharing.

According to the embassy warning, “extremist organisations continue to plan attacks against a variety of targets in Afghanistan, including a heightened risk of attacks targeting female government and civilian workers, including teachers, human rights activists, office workers, and government employees.”

The embassy did not provide specifics, including how imminent is the threat.

The Taliban have been harshly criticized for their treatment of women and girls during their five-year rule when the insurgent group denied girls access to school and women to work outside their home.

The Taliban rule ended in 2001 when a US-led coalition ousted the hard-line regime for its part in sheltering al-Qaida, which was responsible for the 9/11 terrorist attacks on the United States.

One of the government-appointed peace negotiators, Fawzia Koofi, a strong, outspoken proponent of women’s rights, was shot last month in Afghanistan, but escaped serious injuries and attended the opening of negotiations last weekend.

The Taliban quickly denied responsibility and Khalilzad again warned of the dangers to the process.

The United States has said that perhaps one of the most dangerous extremist groups operating in Afghanistan is the Islamic State affiliate, headquartered in the country’s east and held responsible for some of the most recent attacks.

The IS affiliate has declared war on minority Shiite Muslims and has claimed credit for horrific attacks targeting them.

The United Nations as well as Afghanistan’s many international allies have stressed the need for any peace deal to protect the rights of women and minorities.

Negotiations are expected to be difficult and protracted and will also include constitutional changes, disarming the tens of thousands of the Taliban as well as militias loyal to warlords, some of whom are allied with the government.

The advances for women made since 2001 have been important. Women are now members of parliament, girls have the right to education, women are in the workforce and their rights are enshrined in the constitution.

But the gains are fragile, and their implementation has been erratic, largely unseen in rural areas where most Afghans still live.

The 2018 Women, Peace and Security Index rated Afghanistan as the second worst place in the world to be a woman, after Syria.

Only 16 per cent of the labour force are women, one of the lowest rates in the world, and half of Afghanistan’s women have had four years or less of education, according to the report, which was compiled by the Georgetown Institute for Women, Peace and Security and the Peace Research Institute of Oslo.

Only around half of school-aged girls go to school, and only 19 per cent of girls under 15 are literate, according to the UN children’s agency.

Nearly 60 per cent of girls are married before they are 19, on average between 15 and 16 years old, to spouses selected by their parents, according to UNICEF.

Until now, parliament has been unable to ratify a bill on the protection of women.

There are also Islamic hard-liners among the politically powerful in Kabul, including Abdul Rasul Sayyaf, who is the inspiration behind the Philippine terrorist group Abu Sayyaf, and Gulbuddin Hekmatyar, a US-designated militant who made peace with President Ashraf Ghani’s government in 2016.