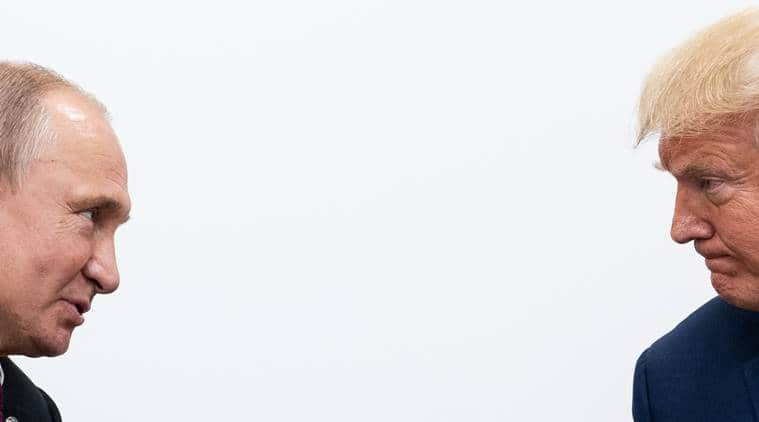 On the eve of accepting the Republican nomination for president four years ago, Donald Trump declared that he would pull out of NATO if US allies did not pay more for their defense, waving away the thought that it would play into the hands of President Vladimir Putin of Russia, who has spent his career trying to dismantle the Western alliance.

Asked about his deference to the Kremlin leader, Trump responded, “He’s been complimentary of me.”

This week, as his renomination nears, Trump announced that he was pulling a third of U.S. troops from Germany. He declared in recent days that he had never raised with Putin, during a recent phone conversation, U.S. intelligence indicating that Russia was paying a bounty to the Taliban for the killing of U.S. soldiers in Afghanistan, because he distrusted the information from his own intelligence agencies. Nor has he issued warnings about what price, if any, Putin would pay for seeking to influence the 2020 election or pushing disinformation about the coronavirus. U.S. intelligence agencies say Russia is trying both.

Say this about Trump’s approach to Moscow: It has been consistent.

With three months until Election Day, he is repeating a variant of lines that he uttered during his first campaign. It would be “wonderful” if “instead of fighting each other, we got along.” That he and Putin are working together to reduce the threat of nuclear war, even though both nations have spent the past four years developing nuclear weapons and scuttling treaties that limited their stockpiles. In recent days, he has begun deflecting questions about Russia’s cyberactivities by repeating another line from 2016: that everyone turns a blind eye to China.

What is striking about all these comments is that they indicate little or no evolution in Trump’s approach.

John F. Kennedy used the Cuban missile crisis to start the era of arms control negotiations with the Soviets, and Ronald Reagan transitioned from the hard-line anti-communism of his party to doing business with a reformist Kremlin leader, Mikhail S. Gorbachev. But Trump has never wavered from a policy of praise and nonconfrontation. Just as he rarely misses a campaign-season opportunity to take on Beijing, he has not wavered from accommodating Moscow.

The absence of a strategy to alter Moscow’s behavior at this electoral inflection point — four years ago this week, the CIA was coming to the conclusion that Russia was responsible for the hacking of the Democratic National Committee’s servers — has been particularly evident in recent days. After trying to raise doubts that Russia was behind the breach, the release of emails and a social media influence campaign, Trump has settled on a strategy of silence about evidence of an emerging new Russian playbook.

So when he spoke with Putin recently, the White House gave no indication that the warnings from the intelligence agencies and the Department of Homeland Security even came up.

“At this very moment, Putin is presumably deciding how far to go in interfering in the 2020 election,” said David Shimer, a historian and author of “Rigged: America, Russia, and One Hundred Years of Covert Electoral Interference,” a new study of Russian and U.S. efforts to influence elections around the globe. “Leaders like Putin push as far as they can without provoking meaningful pushback, and in that sense, Trump’s continued passivity toward Russia could embolden Putin to proceed more aggressively.”

Not surprisingly, the administration rejects the notion that it has given Putin free rein. Trump regularly says no U.S. president has been tougher on Russia than he has, “maybe tougher than any other president.”

The president’s advisers point out that Trump’s own Justice Department indicted 12 Russian intelligence officers for breaking into the Democratic National Committee and running the social media campaign — though Trump has questioned Russia’s ability for both. Under authorities given to it by the president, the director of the National Security Agency and commander of United States Cyber Command, Gen. Paul A. Nakasone, briefly paralyzed the Internet Research Agency, a troll farm in St. Petersburg, Russia, during the 2018 midterm elections to send a message. (Trump later said he was responsible for the action.)

And Trump’s secretary of state, Mike Pompeo, declared the U.S. would never recognize Russia’s annexation of Crimea — “Crimea is Ukraine,” he said on the sixth anniversary of the unilateral seizure of the territory, not mentioning that Trump said in an interview with The New York Times in 2016 that he did not understand why the U.S. was penalizing Russia for events that primarily affected allies far away.

But it is the withdrawal of troops from Germany, and the absence of any response to the intelligence on the bounties offered to the Taliban for killing Americans, that seems to encapsulate the administration’s absence of a strategy.

Pompeo struggled to offer up a defense on either in Senate testimony Thursday. He noted that as a newly minted Army officer during the final days of the Cold War, he himself “fought on the border of East Germany,” leading Sen. Jeanne Shaheen, D-N.H., to note wryly that under Trump’s orders “your unit is coming back to the United States.”

But Pompeo’s testimony was more notable for what he failed to say. He provided no strategic rationale for the reduction of 12,000 troops in Germany, including 6,400 returning to the U.S. He made the case that they could return to Europe quickly, but never addressed the fundamental issue: that the decision was part of presidential pique that Chancellor Angela Merkel of Germany was not devoting a big enough portion of the national budget to her nation’s defense — and that reducing the U.S. military presence in Germany fulfilled one of Putin’s greatest dreams.

“Germany is supposed to pay for it,” Trump said of the U.S. presence, as if the forward deployment was not a central part of the U.S.’s own defense strategy for the past 75 years. “Germany’s not paying for it. We don’t want to be the suckers any more. The United States has been taken advantage of for 25 years, both on trade and on the military. So we’re reducing the force because they’re not paying their bills.”

For four years, Trump has talked about “NATO fees.” There are no such fees. Six years ago, alliance members agree to spend 2% of their gross domestic product on their individual defense by 2024. Germany spends 1.5%; Italy and Belgium, where the U.S. says it is moving some of its forces, spend less.

Pompeo further muddied the waters on the intelligence surrounding the bounties for American lives. Citing intelligence concerns, he would not discuss the CIA analysis that was included in a Presidential Daily Brief in February that Trump says never reached his desk.

What is still missing is any statement of what the administration is trying to accomplish with Russia. Getting Putin to back down? A new détente? Modern containment of a declining but still disruptive nuclear power? An end to use of its cyberpower to step into the middle of U.S. elections?

Trump has had four years, and he hasn’t said.

“There appears to be no overarching objective, no strategy for getting there, no coherent policy process,” Wendy R. Sherman, who served in the State Department during the Obama and Clinton administrations, wrote in Foreign Policy on Friday. “There is no evidence, for example, of a desire to preserve arms control with Russia or to stop Russia’s (or any other country’s) persistent disinformation campaigns that are now looming as an ever-larger threat to the integrity of the U.S. election.”