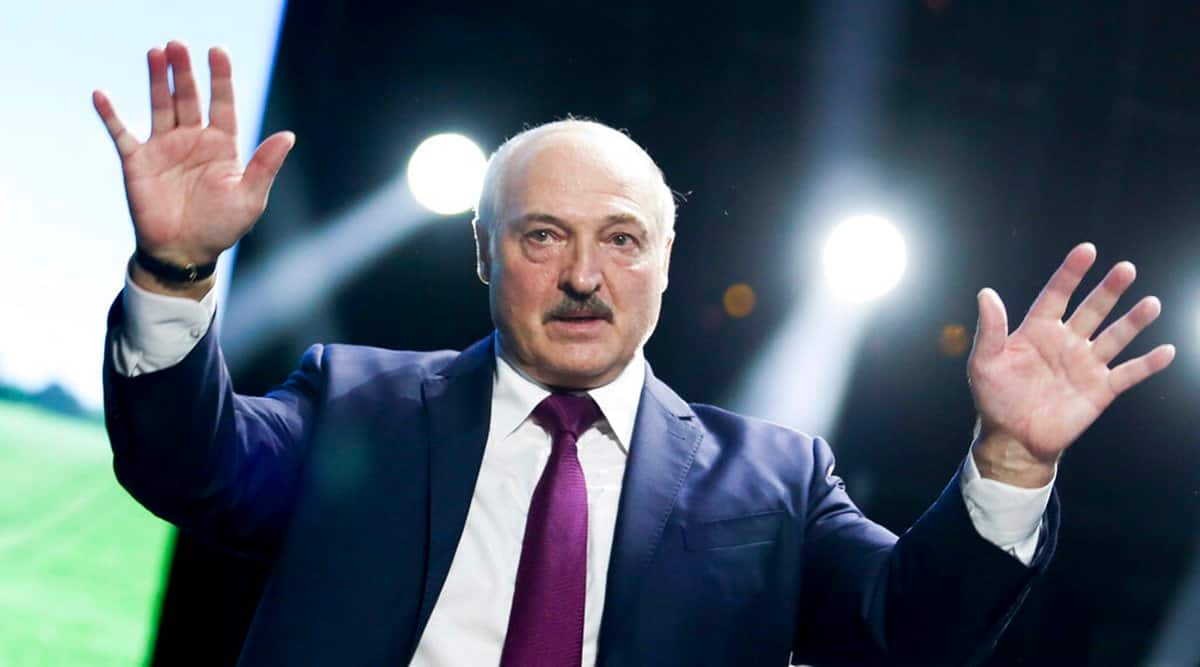 Belarusian President Alexander Lukashenko gestures as he addresses a women’s forum in Minsk, Belarus, Thursday, Sept. 17, 2020. President Alexander Lukashenko’s decision to close the borders with Poland and Lithuania underlines his repeated claim that the massive wave of protests is driven by the West and comes amid increasing criticism from the United States and the European Union. (TUT.by via AP)

Belarus’ borders with Poland and Lithuania remained open on Friday, a day after the country’s embattled president Alexander Lukashenko threatened to close them and accused its two neighbouring nations of instigating over a month of violent riots against his administration, AP reported.

Lukashenko on Thursday declared that he was putting the army on high alert, closing Belarus’ western borders, and strengthening the country’s border with Ukraine, AP reported. “We are forced to withdraw troops from the streets, put the army on high alert and close the state border on the west, primarily with Lithuania and Poland,” he said.

However, both Polish and Lithuanian officials on Friday noted that traffic remained the same at their border with Belarus, according to an AP report.

Meanwhile, Lukashenko’s primary political opponent Sviatlana Tsikhanouskaya urged Belarusians to ignore his claims. “Lukashenko already has tried to scare us with enemies that don’t exist. He has accused peaceful people of being engaged in violence and tried to cast the true patriots as traitors,” she said in a statement. “But his talk yesterday about closing the borders marks a new level of distancing from the reality. It was a talk by a weak person about his own imaginary world.”

Over the last six weeks, Belarus’ streets have been overrun by demonstrators following the re-election of Lukashenko, in a highly-controversial campaign and disputed election. At least 10,000 demonstrators have been arrested amidst a violent crackdown by the country’s police force.

Ever since the election results were announced, several opposition leaders, including the main opposition candidate Tikhanovskaya, were forced to leave the country and many others were imprisoned.

Here are the latest developments from Belarus

An independent team of experts has been appointed by 17 members of the Organization for Security and Cooperation in Europe (OSCE) to investigate alleged vote fraud and rights violations during Belarus’ controversial presidential election in August, Reuters reported.

“Basically, the mission is about holding the Belarussian authorities accountable for their gross violations of the right of the people of Belarus to have free and fair elections, fundamental freedoms and a well-functioning rule of law,” Denmark’s Foreign Minister Jeppe Kofod said.

The team will publish an exhaustive report within the next six to eight weeks after investigating claims of human rights violations, a violent crackdown on peaceful protestors, as well as the persecution of candidates, journalists and activists, the Reuters report stated.

In a speech delivered at the United Nations Human Rights Council on Friday, Belarus’ main opposition leader Sviatlana Tsikhanouskaya demanded the country’s authorities to end the violent crackdown on protestors and also called for a fresh and fair election, Reuters reported.

Tsikhanouskaya was earlier forced into self-imposed exile in Lithuania after she was allegedly threatened by the country’s leadership, BBC reported. “God forbid you face the kind of choice that I faced,” she said in a YouTube video shared soon after she left the country. “Children are the most important thing in our lives.”

Belarus could bring down ‘another iron curtain’ in Europe, UN investigator says

During a debate on alleged human rights violations in Belarus over the last month, a UN investigator warned that the situation in the country could lead to another iron curtain falling across Europe, the Guardian reported.

“Let’s not allow another iron curtain to descend on the European continent,” Anaïs Marin, the UN’s special rapporteur on Belarus said during an urgent session of the human rights council. Marin also called the human rights situation in Belarus “catastrophic”.

The iron curtain refers to a non-physical boundary running through Europe that was set in place by the Soviet Union after World War 2 to seal both itself and its allies off from the west and other non communist areas.

Germany has urged the United Nation’s top human rights body to look into reports of torture, “arbitrary deprivations of life” and sexual and gender-based violence during the month-long protests in Belarus, AP reported.

The country presented a resolution before the Human Rights Council, pointing to the alleged intimidation, harassment and detention of President Lukashenko’s political adversaries after the election on August 9.

Both the European Union and the US government have condemned the election, calling it neither free nor fair. They have urged the government to engage in a dialogue with the opposition to quell the ongoing crisis in the country.

Belarusian protest leader Maria Kolesnikova was charged with incitement to undermine national security this week, BBC reported. She is the only remaining woman, out of three female opposition leaders, to remain in the country after the contested election.

Earlier, Kolesnikova was said to have ripped up her passport and threw it out of the window of a car when officials tried to exile her to Ukraine. According to her colleague Anton Rodnenkov, “She was pushed into the back seat (of the car), she yelled that she wasn’t going anywhere.”

Rodnenkov said that he and another colleague had also earlier been abducted, and interrogated with hoods over their heads and their hands tied, BBC reported.