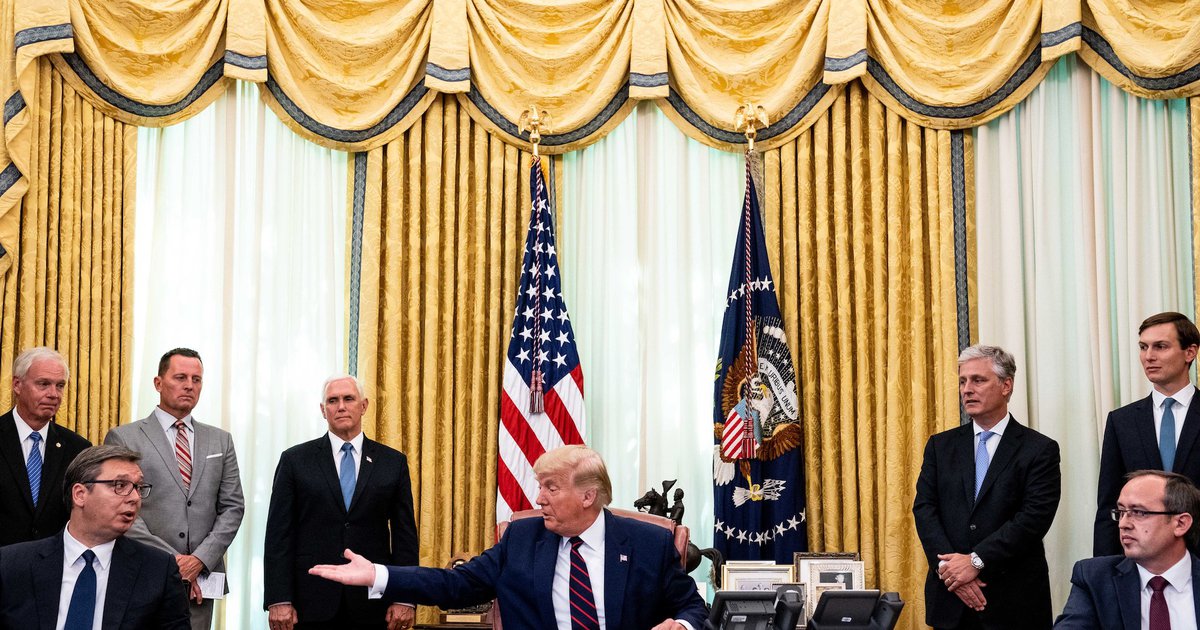 On September 4, Serbian President Aleksandar Vučić met with the PM of Kosovo Avdullah Hoti in the White House, in the presence of Donald Trump, to sign the “Economic Normalization Agreements  between Belgrade (Serbia) and Pristina (Kosovo)”. Trump celebrated Hoti and Vučić as “brave men” for signing the “historic” trilateral agreement. Closer analysis reveals this “historic” encounter as yet another PR gimmick of Trump’s in the runup to the US presidential elections. In a sense, perhaps this serves a purpose similar to the grandiloquence surrounding the recent Israel-UAE peace deal, which Thomas Friedman of the NY Times called “an earthquake” for Peace.

According to the text of the treaty, the most radical section calls for a moratorium, during which Pristina and Belgrade will both stop their tireless lobbying either for or against an internationally recognized status of Kosovo–for one year.

Procrastination does not solve anything, but it will help the Washington policy hivemind to not think about the Balkans, and will simplify the first troubled year of a possible second term of the Trump administration (also  “an earthquake” but in a more calamitous sense than cheerleader Thomas Friedman intends).

Upon closer scrutiny, the logic of the agreement falls apart. Amounting to a random hodgepodge of promises and obligations, it looks more like the Trump administration’s Christmas wishlist for that corner of the Eastern Mediterranean rather than a coherent document. Recognisable “Art of the Deal” style points include a ban on 5G equipment sold by “untrusted vendors” (Trumpcode for China); as well as a suprisingly more Obama-like campaign to further the decriminalisation of homosexuality.

A crucial part of this ornamental treaty also covers relations between the Middle East, Serbia and Kosovo.

For example, the agreement states that Kosovo (home to an 88% Muslim population) and Israel agree to “recognise” one another’s legitimacy, while Serbia is encouraged to move its embassy in Israel from Tel Aviv to Jerusalem by July 2021, shadowing the Trump administration’s historic Jerusalem syndrome. This latest bold and insulting provocation has understandably earned vocal reactions from EU officials. And yet, these same condemning EU officials appear weaker by the moment in their collective failure to enforce disciplinary action on profligate EU members such as those composing the Visegrad group, or to muster an EU foreign policy in toto.

In addition, both Kosovo and Serbia pledge to label the Hezbollah movement and Lebanese parliamentary party as a terrorist organization, to be confronted on any territory under Serb or Kosovar jurisdiction. In short, a hope for more division and international involvement by the East European periphery in the volatile Syrian conflicts, in which Hezbollah became embroiled well before Trump’s presidential tenure. The POTUS here takes up the Republican foreign policy tradition summed up by Craig Unger’s 2004 book House of Bush, House of Saud, demonstrating Western willingness to get further embroiled in Sunni-Shia feuds, consequences be damned. Trump also makes the more predictable gestural politics of indulging Israeli fantasies of “recognition” by Muslims of Israel’s continued occupation of the West Bank, East Jerusalem and Gaza.

A simple question arises: Middle Eastern politics bear little relevance to the Belgrade – Pristina scenario, so, why did Washington incorporate the Middle East in this document?