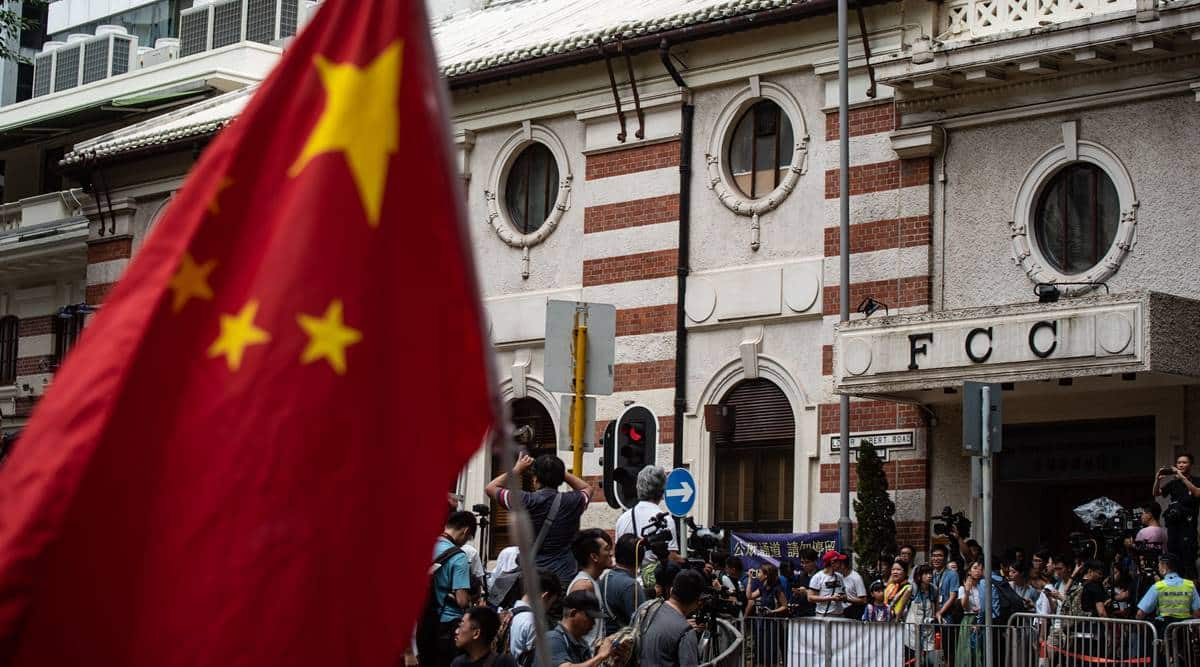 A Chinese national flag is seen as Pro-Beijing protesters (unseen) and members of the media (back) gather outside the Foreign Correspondents’ Club (FCC)in Hong Kong (Photographer: Philip Fong/AFP/Getty Images)

Beijing warned Hong Kong’s foreign correspondents to stop interfering in the city’s affairs under the guise of press freedom, piling further pressure on media organizations in the financial hub.

“We urge FCC Hong Kong to observe national and local laws and regulations, stop provoking trouble on purpose, and refrain from meddling with Hong Kong affairs under any pretext,” the Chinese Foreign Ministry’s local branch in the Hong Kong Special Administrative Region said Wednesday. “No organization or individual shall seek privileges above the law, impede the HKSAR Government’s law-based governance or endanger China’s national security and Hong Kong’s prosperity and stability on the pretext of press freedom.”

Foreign correspondents who don’t have government accreditation may still be able to cover police activity, so long as front-line officers deem them to be representatives of “internationally recognized and reputable non-local news agencies, newspapers, magazines, radio stations and television broadcasters,” the police said in a letter sent to the FCC on Tuesday. Journalists without accreditation will be barred from attending police news conferences and could be challenged while attempting to cover incidents of unrest.

“This is about more than access to events and invitations to the inside of the police cordon,” the FCC said earlier Wednesday. “Journalists who are not recognized under this new policy could face the real possibility of arrest for unlawful assembly or rioting.”

Bloomberg journalists are members of the club and serve on its board.

In its statement, the Foreign Ministry argued that “troublemakers” calling themselves journalists had obstructed police from enforcing the law and assaulted officers during historic anti-government protests last year. They were also “hampering the interviewing and reporting work of other journalists and seriously undermining law and order,” it said.

The accreditation policy is the latest move fueling concerns about the former British colony’s commitment to press freedom in the wake of a national security law imposed by Beijing. The legislation required Chinese agencies and the local government “to take necessary measures to strengthen the management of” foreign news organizations, without elaborating.

The FCC has increasingly become the target of criticism from Beijing and its supporters. The Foreign Ministry similarly rebuked the club for criticizing the Apple Daily raid, accusing it of trying “to whitewash and justify Jimmy Lai and other criminal suspects.”

In 2018, Hong Kong authorities refused to extend a work visa for Financial Times editor Victor Mallet, who had, while acting president of the club, presided over a speaking event featuring a pro-independence activist.