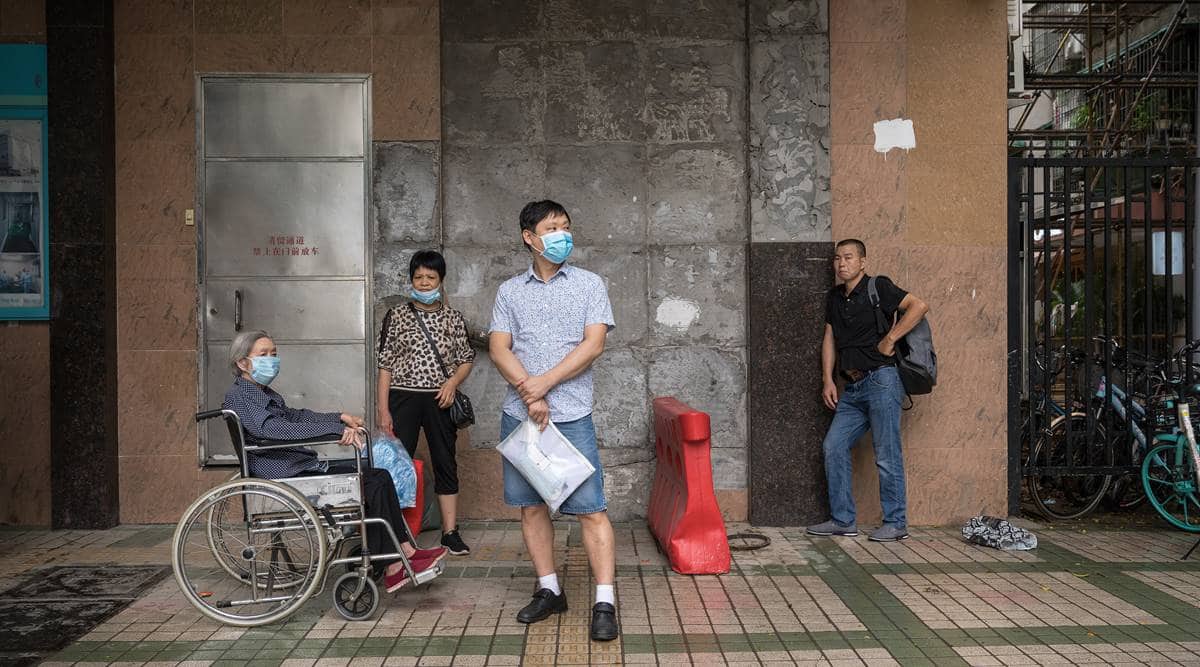 Jiang Weixing, left, lives in a building with a retrofitted elevator, in Guangzhou, China. (The New York Times)

Now, a top Chinese official has a new idea to rev up growth during the coronavirus pandemic: elevators.

China’s premier, Li Keqiang, and his allies in the government want to retrofit as many as 3 million older, walk-up apartment buildings, projects that usually cost less than $100,000.

The downsized ambitions reflect the evolution of China from a youthful but impoverished country to a graying but increasingly middle-class one.

Although China still likes grandiose infrastructure projects, they no longer have the same economic effect. High-speed rail lines and superhighways already link every large city, so new ones connect smaller and smaller communities in China’s mountainous interior — at exorbitant cost. And the country’s debt has spiraled so high that it has become a serious drag on growth.

While elevators may pack a smaller economic punch, they provide a social benefit for a rapidly aging population. A wealthier Chinese society is also demanding more from its leaders.

Kong Ting endured nine months of pregnancy in a 10th-floor walk-up apartment in Guangzhou, the semitropical hub of southeastern China. Several times a day, she trudged up and down the building’s 162 stairs. “The hardest part was carrying food and drinking water,” she said.

Every day, she sat on the building’s third-floor patio and complained to the neighbors, many of them older. Last year, most apartment owners in the building chipped in $4,300 apiece, collected a large municipal subsidy and added a small elevator to the side of the building.

Buildings all over China need a similar upgrade.

As China’s economy started to open up after Mao Zedong’s death in 1976, young migrants moved en masse from the farms to newly built factories popping up everywhere. Over the next 25 years, Chinese cities swelled by almost as many people as the entire population of the United States.

Almost none had elevators. China was still a poor country. It had few factories to manufacture elevators. Imports were expensive.

The lack of elevators is now a major problem in a rapidly aging society.

Through the 1960s, Mao encouraged families to have lots of children. The slogan became “the more people, the stronger we are.”

Starting this year, babies born in the 1960s are turning 60, an age by which many Chinese retire. They have few children or grandchildren to help them, since China began imposing its stringent “one child” policy in the 1970s.

“If we do not prepare ahead of time, we may have a greater challenge than expected” as the number of older adults in China rises steeply, said Lu Jiehua, a professor of demographic studies at Peking University.

Without elevators, many longtime tenants become trapped in their homes, reliant on food deliveries and unable to meet friends or go for walks.

Jiang Weixing, a white-haired woman in her 90s, sat in sunshine in a wheelchair outside a Guangzhou clinic on a recent afternoon. She waited briefly with two younger family members for a special wheelchair-accessible taxi that took her home after a medical treatment.

Until the recent addition of an elevator to her high-rise building, Jiang almost never left her apartment. Doing so required two or three people to carry her down many flights of stairs.

Elevators, or the lack of them, have become another cause of surging economic inequality in China.

Guangzhou, a fairly affluent and socially progressive city, can afford to subsidize the projects and has already added about 6,000 elevators to older buildings — almost as many as the rest of China combined. In Beijing, the prosperous municipal government pays almost the entire cost of elevator installations, offering a $93,000 subsidy to apartment buildings within the city limits.

Many less affluent cities have no programs for elevator installation or tiny ones. In far southern China, Zhanjiang offers a meager $3,000 subsidy for each apartment building.

The projects also are not universally appreciated, particularly by residents on bottom floors. Elevators usually block one or more of their windows and scarcely benefit them.

Chen Xin, a 52-year-old owner of a ground-floor apartment in Guangzhou, initially resisted an elevator project in her building that involved bricking up her front door, forcing her to come and go through a side door onto a patio. Chen agreed after residents of higher floors paid her $3,500.

Guangzhou’s approach is spreading. Hefei, a metropolis of 8 million people in central China, announced Sept. 1 that it was adopting a similar rule.

From an economic perspective, a national elevator policy, which Li proposed in May in his annual speech to the country’s legislature, could help mitigate the economic effects of the pandemic on China’s blue-collar workers.

Constructing elevator towers of concrete or glass and steel up the sides of apartment buildings is labor-intensive. It could provide jobs to some of the tens of millions of still-unemployed Chinese migrant workers.

But the plan’s supporters may lack the political muscle to make it truly national.

Building elevator shafts on the sides of buildings is a task dominated by small, private contractors in China. The contractors then buy elevators from a multinational — usually Otis Elevator, Schindler, Kone, Mitsubishi Electric or Hitachi — or one of several smaller Chinese manufacturers, like IFE Elevators in Guangzhou.

While China’s top leader, Xi Jinping, has called for greater reliance on domestic demand to stimulate growth and has separately called for addressing poverty and improving housing for the elderly, he has not specifically backed a national elevator agenda.

His main constituencies — the military, security agencies and very large state-owned enterprises — have little to gain from elevator projects. They have focused on building rail lines and highways that allow China to rush troops to remote hot spots, like the border with India.

Housing experts in China insist that the country will resolve its elevator shortage. “Everyone invests together, and then solves the issue,” said Huo Jinhai, a senior engineer at the Ministry of Housing and Construction.

And the plan has a powerful backer: the Ministry of Finance.

Such support is rare. The ministry has kept central government spending on a very tight rein even as most local and provincial governments have plunged deep into debt.

One of the ministry’s most famous budget hawks is Jia Kang, its longtime research director. When he finally retired, the ministry set up an influential advisory group nearby for him to run, the China Academy of New Supply-Side Economics.

In his new role, Jia has emerged as an outspoken advocate of spending money — on elevators. His support is born of personal experience.

Jia, 66, and his wife, Jiang Xiaoling, 63, bought a tiny ground-floor apartment years ago and then, as their savings grew, purchased a somewhat larger third-floor apartment nearby. They walk back-and-forth between the two apartments many times every day, and want an elevator installed so that they do not need to trudge up the stairs.

“In recent years,” he said, “my wife frequently complains, ‘Why do we tolerate these conditions?’ ”